The above lines from a Nick Cave song have been haunting my mind all day. Here in Phnom Penh, Cambodia, I have visited both the Tuol Sleng museum of genocidal crimes and the Killing Fields of Choeung Ek also 15km from Phnom Penh. This is not the place for a detailed historical reprisal of that terrible time in the 1970’s when the Khmer Rouge dominated Cambodia effectively turning the country into a giant penal colony causing the deaths of 2 million people amongst a population of 16 million.

It is a story of a communism revolution led by psychopathic, brutal leadership set amidst the destabilising Vietnam war which radicalised much of the population. The colonial background of the country as well as, strangely, royalist sympathy on the part of the Khmer Rouge added to a complex, combustible mix. But why did it become so bloody ?

The loss of morality echoes  Nazi Germany,  Stalinist Russia or Maoist China. Why did the twentieth century produce such horrors? Of course technology plays a part in enabling such atrocities but there is also an appaling moral failure.

Dosteovsky, the great Russian novelist, presaged this. He writes primarily about how people justify crimes to themselves especially when timeless spiritual truths are called into question, usually amongst educated elites who consider themselves too sophisticated for such truths. His novels show this on a personal level, particularly Crime and Punishment and The Brothers Karamozov. The 20th century bares out this prophecy on a societal level.

The trip to Tuol Sleng was informative and moving. A former high school it became a murderous prison camp during the Khmer Rouge era. Thousands died here along with millions in the country as a whole. It is impossible to take it in. It’s impossible to put it in context. It’s brutal, it’s murdurous. It’s children with machine guns. It’s mass evacuation of the cities. It’s forced labour and torture. 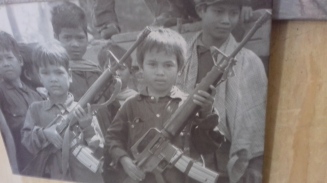 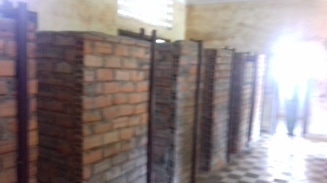 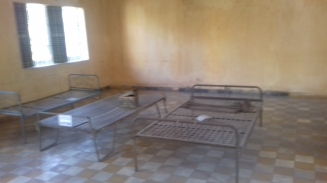 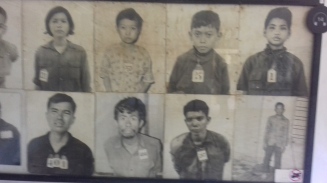 In the afternoon I went to the killing fields of Choeung Ek. It was also very moving. This was where people were murdered and buried as quickly as possible, hundreds in a day. The killing tree is the saddest monument I have ever seen. I dont have the heart to go into it here nor did I have the heart to take a pictureof it or even to stand and look. I walked past it. I took few photos here. I had little desire to. I simply walked around feeling every step of the way.

I had concerns about engaging in disaster tourism before today but I have no concerns now. Everything was very well done, with heart and sincerety and it is so good we take the time to reflect on evil and how it can invade society.

At the end of my time in Tuol Sleng I attended some beautiful chanting. Ill leave you with that